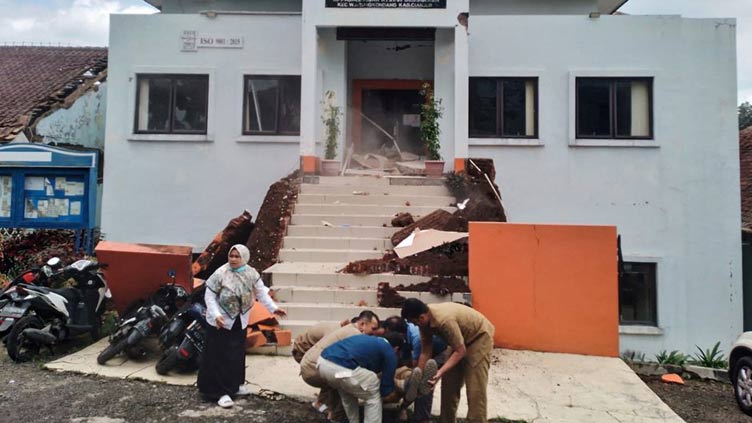 A 5.6-magnitude earthquake struck the Indonesian province of West Java on Monday, resulting in 46 confirmed fatalities and potentially injuring even more people as rescue workers continued to scour the wreckage.

The quake struck on land in Cianjur, 75 km from the capital Jakarta. The depth was 10 km, according to the geophysical and meteorological service (BMKG). As per the details, there’s no chance of a tsunami.

The head of the agency in charge of the disaster said 46 people have died so far, and there may be as many as 700 people injured.

According to Herman Suherman, a government official in Cianjur, residents who were buried under rubble had to be extracted. A hospital parking lot was shown on Metro TV to have hundreds of victims being treated.

Homes and an Islamic boarding school were damaged and the area’s electricity went out, disrupting communication in the region.

Footage from Metro TV showed some buildings in Cianjur reduced almost entirely to rubble as some of the people there stayed outside.

One of the local residents, Muchlis said he felt “a huge tremor” after the quake hit, and his office’s walls and ceiling were damaged.

“I was very shocked. I was worried there would be another earthquake.” Muchlis told Metro TV.

Two hours after the earthquake, BMKG announced 25 aftershocks and a strong risk of landslides during periods of heavy rainfall.

The details said that Jakarta was shaken by the quake, with buildings and furniture rattling, and some employees left their offices.

Indonesia is right in the middle of the Pacific Ring of Fire, which has all sorts of risks associated with it including earthquakes and volcanoes.

It is pertinent to mention here that in 2004, a 9.1 magnitude earthquake off Sumatra island in northern Indonesia triggered a tsunami that affected 14 countries, killing 226,000 people, more than half of whom were Indonesians.