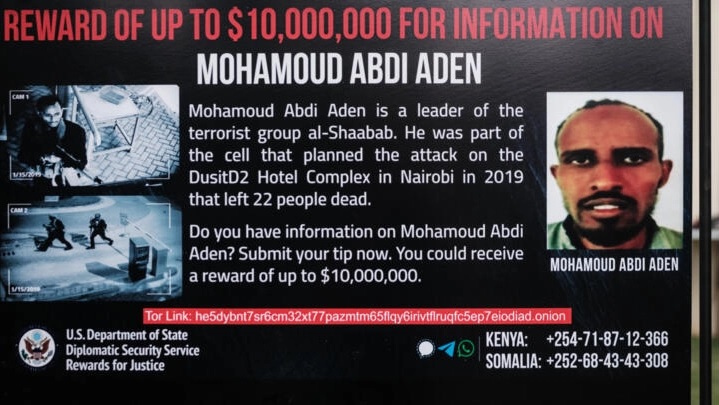 The U.S. announced that it had offered a reward of $10 million for a man who was described as the mastermind of the bloody hotel attack in Nairobi four years ago in 2019.

The United States said it wished for information on Mohamoud Abdi Aden, who was described as a leader of the Somalia-based Al-Shabaab jihadist group by local media and was involved in several deadly attacks in neighbouring Kenya.

The January 15, 2019 attack on the upscale DusitD2 hotel complex in Nairobi was attributed to a group affiliated with Al-Qaeda.

According to the details, at least 21 people lost their lives, including a US citizen, and many more were injured. The officials of Kenya said that all the assailants had been neutralized.

“Mohamoud Abdi Aden, an Al-Shabaab leader, was part of the cell that the planned the DusitD2 hotel attack,” the US ambassador to Kenya, Meg Whitman, told reporters in Nairobi.

Mohamud Abdi Aden was an Al-Shabaab leader who planned the attack at the DusitD2 hotel. The US Ambassador to Kenya, Meg Whitman, told officials in Nairobi that Aden was involved with the plot.

The details further said that the Directorate of Criminal Investigations of Kenya Amin Mohmed Ibrahim described Aden as the mastermind of the deadly terror attack.

On the other hand, The State Department designated Aden a “specially designated global terrorist” in October last year.